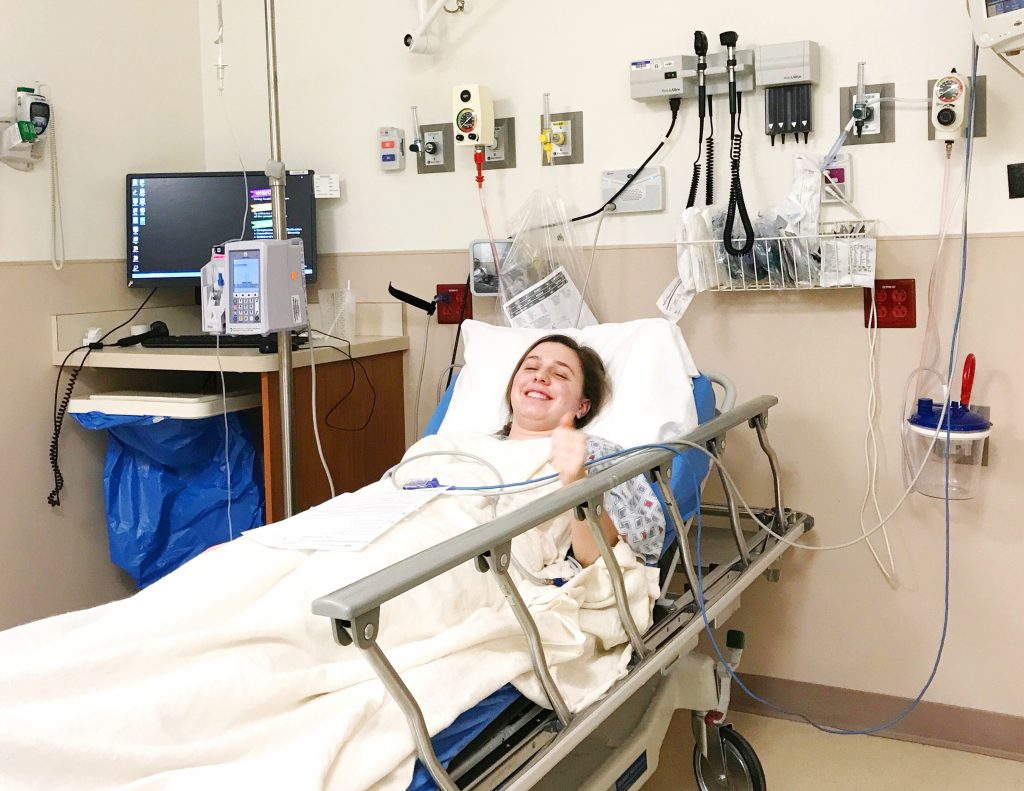 It pains me to be writing this post. To everyone who has followed along on my Instagram, you might know how much I’ve been suffering. I’m writing to update you on my health overall and how it got to this point, plus what my new doctor said on Wednesday.

Also I apologize for the double chin in my photo for this post (#doublechinforthewin). This is like the only picture I have of myself from the last month where I don’t look miserable.

I’m going to go ahead and start at the beginning of my story. Plus, every new doctor I meet with asks me to start at the beginning, so maybe I can just send them to my blog before they meet me instead 😜 (totally kidding, but maybe not…). If you’re someone who is squeamish reading about health stuff (I get it because I totally am), I will keep this post as PG as possible.

So about 3-4 weeks ago now, on a Sunday, I was getting ready to meet my mom at the movies. I was laying in bed and I felt this awful pain in my left side. It felt like a charlie horse, and nothing I did could make it feel better. I just stayed laying down and finally after 15 minutes it subsided. I didn’t think much of it at the time.

The whole next week I started to get these pains in my abdomen and back. It felt like an aching pain all of the time plus the occasional cramp. Since I felt like I was getting worse, I decided to go to a Right Time doctor on Thursday, 2/8. They did some tests in office and everything looked fine, so they sent me to get an ultrasound. She believed it could have been an upper kidney infection that wasn’t showing up in my blood or urine. I went that same afternoon to get my ultrasound. The woman who did my ultrasound was really nice. It was a general abdomen and renal (meaning kidney) ultrasound and she seemed very diligent. Although they can’t tell you your results (they send them to your doctor), she told me that it looked like there was fluid in my left kidney. My Right Time doctor called me about an hour later saying she thought it looked like I had kidney stones. She said I should have a CT scan ASAP to see how big the stones were. She wasn’t able to authorize my CT scan through my insurance since she wasn’t my PCP, so she recommended I head to the ER since they could do everything there.

We drove over to the ER and I was checked in pretty quickly. It was probably around 5pm at this point. We got back to the room and they did more blood and urine tests while I waited for my CT scan. Finally I was taken to get the scan. They did an IV contrast to help see what could be wrong. Around an hour later, the doctor came back and said the only thing they found was mesenteric lymphadenitis, which is a fancy word for saying that my lymph nodes around my intestines were inflamed. The doctor believed I could have just had a viral infection that was leaving my body. She said to come back to the ER if I felt too much worse.

That weekend I just slept. I called my aunt and uncle, both of which are doctors, and had them look over my tests. My pain was getting worse over the weekend and I was getting some other symptoms too like night sweats and a rash, so I wanted them to double check to make sure the doctor did not miss anything. My Aunt mentioned that it didn’t seem that they had ruled out appendicitis since my notes said my appendix wasn’t visible during my CT. She said appendicitis does not always show up in your blood work, so I could have it. I felt worse all weekend and on Sunday night I could hardly sleep because of my pain.

On Monday morning, 2/12, my dad and I drove back to the ER. I was rushed in and given some IV antibiotics and they planned to do another CT with IV contrast and by-mouth contrast. I had more blood and urine tests done. After my CT scan, the results came back and they said I still had the mesenteric lymphadenitis, but also a ovarian cyst and blood in my urine. I was given antibiotics and pain medicine and told to follow up with my PCP.

Two days later, 2/14, I went back to my PCP and explained everything that had happened. She prescribed more pain medicine and she told me to come back if I didn’t feel better after I finished my antibiotics on 2/19. If you guessed that I didn’t feel better after my antibiotics, you’re right! I went back to my PCP on 2/21. She did a urine test in her office and said it looked clean. Based on my pain, she thought it was still something with my kidneys, so she sent me to have more blood work and a renal ultrasound done. I went to both and checked back in with my PCP for my results on Friday, 2/23. She said that she got everything back and it looked normal, so she thought my kidneys were fine. She suggested I see a GI specialist, since the pain could be coming from something in my GI tract.

I made an appointment with the office she recommended for 2/28, last Wednesday. That weekend before, my pain got worse and I was getting more and more fatigued. I could hardly take a shower without it taking all of my energy for the day. I was sleeping all of the time. I noticed that the pain seemed to be worse after I ate something. I was still having the night sweats and weird rashes. I already struggle with depression and anxiety, but this was making it so worse. I was losing hope since we couldn’t find any answers. I didn’t have the energy to do anything and I was in so much pain which would make my anxiety and depression worse. I’ve also been struggling with self-acceptance and confidence, so the idea of getting in front of a camera to make blog posts and take Instagrams scares the crap out of me. I called my mom before class one day just sobbing. My mom mentioned that I should try acupuncture, so I went the morning before my appointment and it was amazing! I’ll do a whole post on that later, but it really helped to improve my mood. It didn’t help too much with my pain, but that’s because we don’t know what’s wrong with me so she couldn’t target for a specific type of pain.

I went to the appointment on Wednesday to meet with my GI. We went over everything that happened and I explained all of my symptoms. He said that my symptoms don’t really match up, so they don’t point to anything specific. He is going to test me for a bunch of conditions including lyme, lupus, thyroid deficiencies, parasites, and a load of others. If those come back negative, he will preform a colonoscopy and endoscopy to try to get a better idea of what is going on. Tomorrow I am going to head to get my blood work done. I see him in 3 weeks to go over the results. I really like my new GI doctor and he seemed really dedicated to finding out what was wrong with me.

In the mean time, I am on the same pain medicine, a muscle relaxer for my stomach, and a probiotic. I will be going to my acupuncturist every week for 4-6 weeks too as part of my treatment plan. I have been, and continue to, see my therapist every week.

I haven’t gotten better at all, in fact I feel worse, but my medicine makes the pain manageable. Since I have no energy, I have fallen a bit behind in school. I put a lot of pressure on myself to succeed in school, so I’ve been beating myself up. This past week I talked to my parents and my academic advisor about how to move forward in school. We decided together that I will drop one class and if that isn’t enough I will drop another. It’s just really difficult for me since all of my doctors are in Annapolis, which means if I have an appointment, I spend about 4 hours of my day commuting & in the appointment. I’m hanging in there, but I’m exhausted ALL of the time. Seriously. It took all of my energy to write this blog post. And if you’ve made it this far, I’m sorry if this post has any typos. I just am too tired to edit.

The thing I will close on is literally thanking you all for following along and being patient with me as I struggle to get up new content. I have some exciting things planned and will *slowly* get back into the swing of things and work on posts when I feel like I have energy. Because of my self acceptance and self confidence issue that I’m facing right now, I will probably stick to content that doesn’t include pictures of me.

When I was really struggling and sharing about it on my Instagram story, I received so much love back. THANK YOU ALL!! I checked my email that night and my sweet Instagram friend, Madison Short (who is an amazing photographer), had sent me a Starbucks giftcard! It was so nice I literally sat there and cried for like a good 10 minutes. So I’ll leave you with this: These next few weeks, I encourage you to do something nice for someone else! Whether it be reaching out to someone who is struggling, paying for someone’s drink, or sending someone an e-giftcard, just do something to make someone else smile! And reach out to me when you do it so I can see what my amazing followers are doing for others 🙂 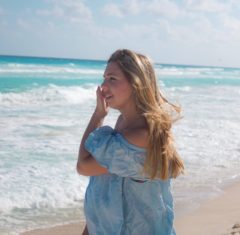 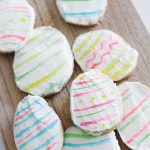 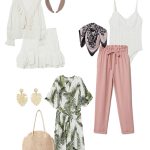 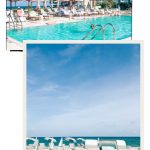